It’s a busy “heads down” couple of weeks in manufacturing, with four STORServer appliances being built right now. The variety of customers is something that’s pretty cool – a very large multi-national manufacturer, a health care company, an aerospace and defense contractor and a government research lab. Wow! 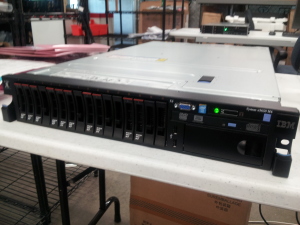 The variety of what’s being built is also an indicator of what we do best: one appliance is using an attached two drive LTO5 library; two of them are using attached SAS storage enclosures and one, the smallest of the four, has all of its storage internal to the appliance itself. One of the external enclosures  model, and the other is 40TB. I think by the end of the year we’ll start to see 60TB enclosures, using 12 6TB drives in our typical RAID6 configuration (meaning two parity drives, so we get the effective capacity of 10 drives in a 12 drive enclosure). I remember back when boot drives were no more than 5 MB in capacity (am I giving away my age? Oh well…) This means we’re approaching an increase of six orders of magnitude in a spinning magnetic drive capacity. For the math-challenged, that’s a factor of one million to one. For those like Wayne and Garth, who “fear change”, the storage industry is not a good career choice.

The largest of the four is using two octa-core Pentium Xeon processors and 4 6Gb/channel RAID controllers, each with 1GB of capacitor-charged flash-backed RAID cache. This is the most RAID cache we’ve ever put in one appliance. These newer capacitor-based charging devices are just a dream come true. No more changing RAID controller batteries every year or so! Since it is a capacitor, it has a *much* longer lifetime that a battery (10 years is the rated lifetime) and it can cycle power 500,000 times! Only the newer RAID controllers on the current generation of appliances support the RAID cache and the connectors that enable using the “ultra-cap”, as they are called. But I’m looking forward to the migration away from traditional batteries to these ultra-caps. You can find more info to satisfy your inner-geek here.

It’s also interesting that we’re currently building appliances based on both TSM and Commvault at the same time. This is due to the excellent manufacturing processes we’ve developed for the two different products (and of course, lots of practice!).

Do NOT follow this link or you will be banned from the site!